Riveters and Whale Go To Overtime!

STAMFORD, CT – The Connecticut Whale were inches from victory over the undefeated Riveters Saturday night, but a pass across the front of the net, was slightly off and a shot at a wide open net could be taken in overtime. Not long after ward Courtney Burke of the Rivs would tee up a shot from the point and Madison Packer would deflect it past Sydney Rossman for a 3-2 victory for the NWHL leading team.

The Riveters continue their undefeated streak, while the Whale are in search of a break in their current losing streak. The closeness of the game however illustrated the Whale’s improved play to fight the Riveters to a 2-2 tie in regulation.

“Five on five…in regulation they didn’t do anything with us. What hurt us tonight…was penalties…and not being able to kill them off,” Whale Head Coach Ryan Equale said. “I think they were 2 or 3 or 2 for 4 on the power play. 50%-66% is just not good enough. So that really was the difference maker, giving them an opportunity to get back in the game.”

It was all Whale in the opening moments of the first period as Meghan Huertas stole a puck from the Riveters in their own zone and break in between two defenders to shoot it past Kimberly Sass for a 1-0 lead.

Moments later, Huertas sent a stretch pass to Kelly Babstock who skated in and defeated Sass one on one for a 2-0 lead.

The Whale’s tendency to get penalties would come back to bite them as the Riveters used a power play to cut the lead. Kelsey Koelzer launched a rocket from the point through the crowd and past Rossman. She was assisted by Kiira Dosdall and Tatiana Rafter.

Another Whale penalty in the second period would also prove to be harmful as Madison scored from one knee past Rossman at close range early in the second. Assists went to Alexa Gruschow and Burke.

That would be all for the regulation scoring as each team had their opportunities but the defenses, goalkeepers or just puck luck got in the way.

While noting the issue of penalties Equale was still optimistic: “We were really proud of the effort that the team put in. Our ability to play 60 minutes has shown the last 2 weeks in a row. The previous nine weeks essentially it wasn’t there. We feel like we’re moving in the direction we want to be. Not the result we wanted, but to get a point against them feels pretty good right now.”

Elena Orlando also noted the team’s improvement from the defensive perspective. “I definitely think we’re getting a lot more cohesive. Everyone is getting used to each other and the system is working out really well, especially with the forwards helping out defensively too,” she said.

The Whale and Riveters both found themselves with solid chances that didn’t find the back of the net. In the Whale’s case there were numerous shots off target. Some of which is to be expected but Coach Equale also assessed it as a timing issue: “I think there needs to be a little bit more patience. It’s just a better understanding of time management. Of recognizing that maybe you have maybe an extra half second, an extra quarter second, which really does make a difference, making sure it’s where you want it on your stick, that you’re able to take a quick look at the net. You don’t need a lot more time to make a better decision that we’re making. Again we feel we’re progressing in the right direction.”

The night also had added importance as the Whale hosted a night in honor of Mandi Schwartz, a former Yale Women’s Hockey player who had Mandi Schwartz who lost her life to Leukemia. The Mandi Schwartz Foundation, headed up by a board including former Yale Captain Aleca Hughes, works to raise funds to battle Leukemia and also promote marrow drives to add potential donors to a registry that can help save lives. As of the game, drives run by the foundation have helped save 27 lives. The foundation and the the BeTheMatch.org donor registry was on hand Saturday night to raise funds and awareness.

The Riveters Bray Ketchum, who played with Mandi at Yale, spoke about the efforts.

“Last night we had the White Out for Mandi, which is held annually at Yale, done by the Yale Women’s Hockey team. We had a great turnout, the girls beat Harvard. I’m really pleased with the turnout at both games. I know the Schwartzes were following along and really excited that we’re still honoring Mandi to this day. What would be her 30th birthday is coming up next weekend, so it is a tough time for the family right now so I think this means a lot to them,” Ketchum said.

Ketchum spoke highly of her teammate: “Mandi was always the hardest worker on the team. Actually my Sophomore year she was the only one who actually completed our running test. That was in a testament to Mandi and who she was as a person. You knew she always had your back. She was a great teammate and friend, a competitor, She worked hard on and off the ice.”

Hughes was also on hand for the ceremonial puck drop which featured Ketchum and current Yale Assistant Coach Amanda Boulier. 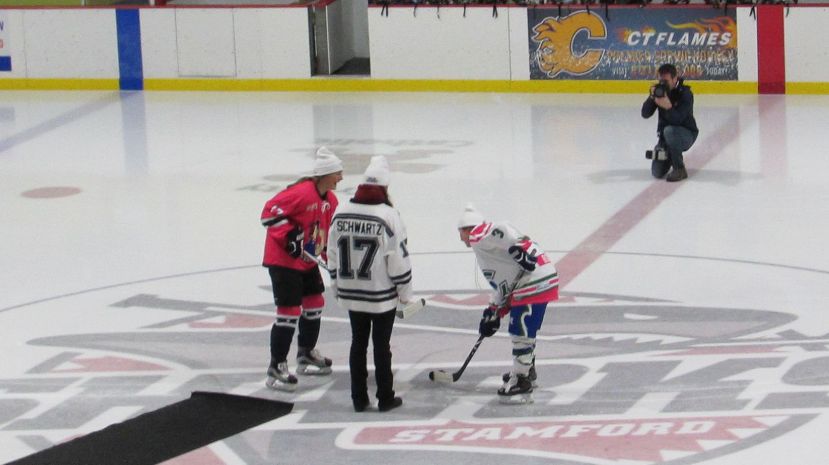 Defensively, the Whale, repeated a feat that the Pride had managed a week before, in holding the Riveters under four goals. Orlando noted that the Whale is adapting to the Riveters style of play more effectively. “I think we’re definitely starting to I guess you could say figure out their game plan a little plan bit better. Adapting to what they’re trying to do, back door plays and what not so I think we’re starting to really figure that out…so communication is working really well to combat their high skill level.”

The Whale also had a new addition in Emma Greco, another Quinnipiac alum from the program’s especially successful past few years. The rookie learned quickly in the new environment. “I didn’t really know what to expect coming in, just because I haven’t been to a game. But I practiced with them last week…I was really impressed with the speed of play…I thought it was a great first game to play in. It was hard, it was fast,” Greco said.

“I thought [Greco] did amazing. She fit right in. You wouldn’t even be able to know that it was her first game. I think she just did awesome. Offensively, defensively, she fit right in,” Orlando said of the fellow Bobcat.

In the NWHL, where team chemistry is a critical element, Greco now joins a core of QU players who are familiar with each other’s style of play. Whereas last year, most of the Whale players from QU were Forwards, Connecticut now has a defensive and goaltending group from the school up the highway in Hamden. “I played with Kelly Babstock when I was a Freshman, but I was still remember it vividly,” Greco said. “I’m just so excited to be back with Cyd {Roesler], Orlando, Babs, Syd Rossman was obviously in my class. I was her defender in front of her for many years so it was nice being back in front of her.”

Sass made 21 saves on the 23 shots she faced, and Rossman made 31 saves on the 34 shots the Riveters threw at her. On the early goals given up by Sass, Packer was quick to dismiss it being a result of the netminder starting the game for the first time this season when asked in the scrum.

“I don’t know if it’s fair to say first game jitters,” Packer said. “She’s played one game in the past two years. But we also hung her out to dry. I think it was a reality check for us, that we rely a little too heavily on Fitzy. If a goalie has an off game, or doesn’t see the puck, you never know what’s going to happen. I thought she did really well. We all acknowledged her as the player of the game in the locker room. We left her out to dry,” Pacer would go on to add the breakaways that were let in on Sass in the first few shots. “That’s just…you can’t do that. She had a hell of a game.”

These are plays that are noticed during game play. They are not exhaustive. A lot are missed. It‘s just what is seen. Read any of these as “at least” rather than “total”.Rather than write these out I am providing the raw notes. (A scoring chance doesn’t necessarily generate a shot. I only list the same scoring chance once in a player’s section.)

Key: (If you see one of these letters under a column it means the following.) 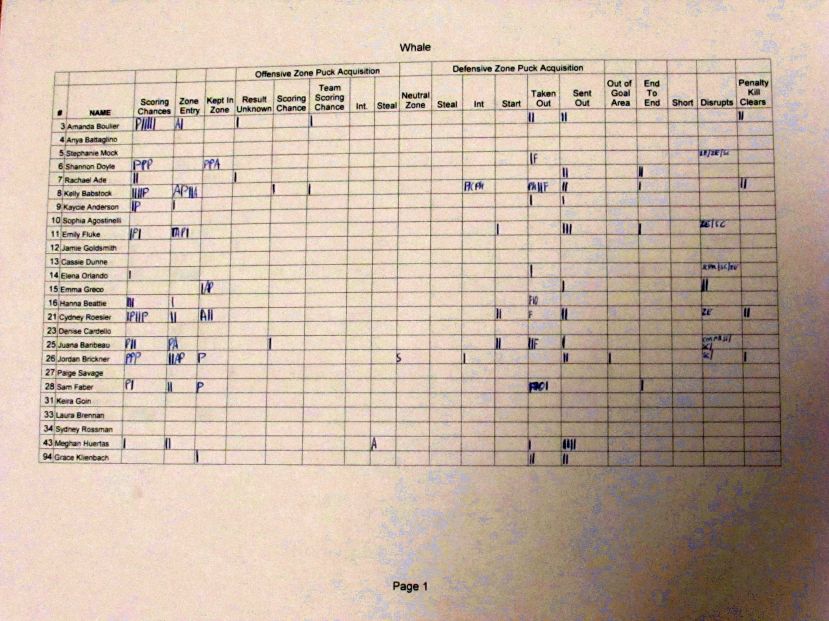