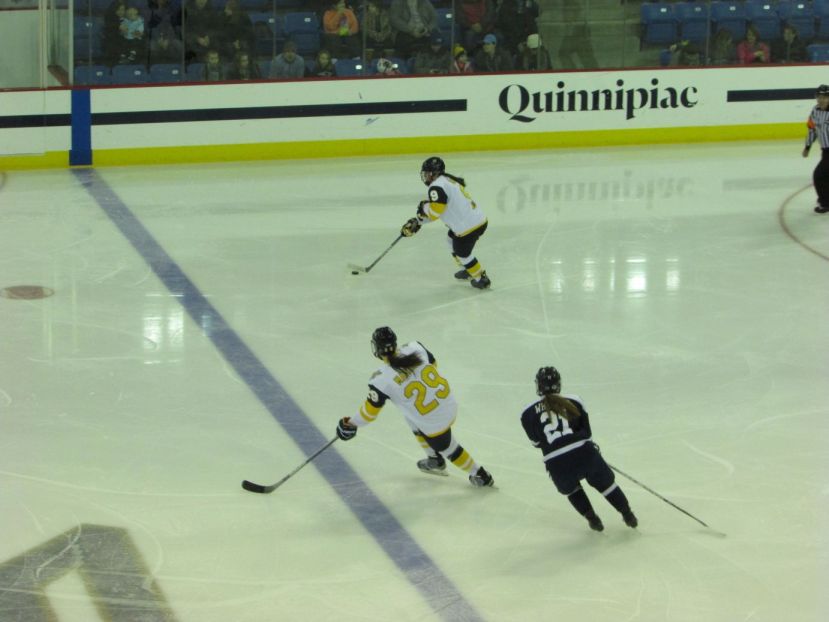 “We couldn’t be more proud of the effort our team put in this entire weekend. We really wanted to build from where we were against Princeton. There were a lot of things we did well and just get that mentality that we’re going to play our best hockey at the end of the season,” Quinnipiac Head Coach Cassandra Turner said.

After a scoreless half of a first period, Yale’s Eden Murray got clear to set up a shot and launched it over Sydney Rossman’s left shoulder for a Yale lead at 10:37. Kara Drexler had the assist as well.

Melissa Samoskevich responded for Quinnipiac at 15:07 slapping the puck through a defender’s legs an past Yale’s Tera Hofmann for her ninth goal of the year.

“I didn’t see it go in honestly, I just heard the fans and said ‘All Right’,” Samoskevich said in post game.

In the second, Kate MacKenzie launched a shot from deep in the zone for QU’s second goal at 1:51. Samoskevich had the lone assist.

“She has a lot of composure with the puck. She played forward when she was younger and you see that in small spaces she’s really good at being able to create time and space for herself,” Turner said of MacKenzie.

The 2-1 advantage continued until the third when Taryn Baumgardt led a 2 on 1 into the Yale zone and took the shot herself. An assist went to Kenzie Lancaster at 11:21. 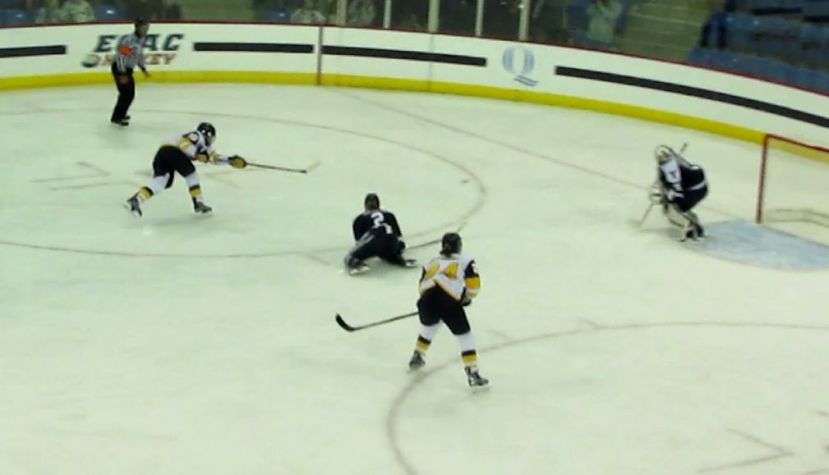 Yale attempted to take advantage of a penalty minutes later by emptying their net, but Emma Woods collected the puck and launched it into the open maw from the neutral zone for a 4-1 lead.

Yale took a few undisciplined penalties during the game, which didn’t help, but Quinnipiac also threw 55 shots on net, and Hofmann made 51 saves. Rossman made 12 saves on the 13 Yale shots.

In terms of blocks, Julia Yetman had 6 for Yale, Saroya Tinker had 3, Brittany Wheeler had 2, and Laura Anderson, Mallory Souliotis, Kaitlin Gately, Taylor Marchin, and Phoebe Staenz had 1 each. For Quinnipiac, Emma Greco had 7 blocks, Kati Tabin and Alicia Barry had 4, Baumgardt had 3, and MacKenzie, Meghan Turner, Samoskevich, and T.T. Cianfarano had 1 apiece.

“I definitely think that this was a huge step for our team,” Samoskevich said of the weekend sweep.

Turner also spoke of the ability to speak to young girls before the game and how excited the girls were to see the team in action as examples of what they could be as well.