By David F. Pendrys [Photo Gallery Is At the Bottom]

MARLBOROUGH, MA- The Boston Blades hosted the Brampton Thunder on Sunday afternoon hoping to split the series after the Thunder’s win Saturday night but it would not come to pass. After a fairly even two periods the Thunder broke open the game in the third en route to a 4-1 win.

Boston’s Genevieve Lacasse was in net for the Blades, and the Thunder deployed Liz Knox.

The first period saw a miscue lead to a goal as she tried to pass the puck away from the net but Rebecca Vint was right there to try to jam it in. The puck flew up and either deflected or fell into the back of the net over the keeper for a lead at 19:03.

After a scoreless half period in the second, Boston’s Tara Watchorn swept in on net in at 9:56 and launched a rocket over Brampton’s Knox which sent the water bottle flying as the puck was roofed. The assist went to Erin Kickham.

Less than 2 minutes later Jamie Lee Rattray swiftly skated around the back of the net and Lacasse moved to meet her, but the puck bounced off the net minder to Jess Jones who hit it into the now relatively open other half of the net for the Brampton lead.

That would be it for the scoring in the second, but the third would turn the momentum of the game to Brampton. At 2:21 Becca King brought it into the zone and fed Jenna McParland on the other side of the net. She lofted it over Lacasse into the corner of the net for a 3-1 Brampton lead. An additional assist went to Fielding Montgomery. As that goal was being announced, Rattray swept in from the opposite side and launched it over the Boston keeper as well at 2:50.

Boston would go on a 5 on 3 power play late in the game, but could not score and the game would end with a 4-1 win for the Thunder.

Other notes: (A note exhaustive list of other plays that might not make the score sheet but were important.)

With DiMasi in the box, Sarah Duncan cleared it, as did Watchorn several times.

With Brampton’s Leah Whittaker in the box, Courtney Birchard cleared it, and Jamie Lee Rattray had a short handed attempted. Kristen Richards came up with a blocked shot and cleared the puck later.

Rebecca Vint had a short handed try as well.

Birchard intercepted a clearing pass in the Boston zone and came up with an opportunity.

McParland stole it in the zone from the Blades as well.

Dru Burns had a blocked shot.

With Burns in the box, Erin Kickham cleared it.

After the goals Brampton kept on the attack. Watchorn cleared it after a long while, though the Thunder came storming back and Lacasse made successive saves.

Eventually DiMasi cleared it after a long Brampton sequence. 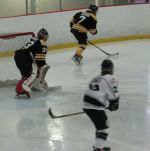