WEST HARTFORD, CT- The Hartford Hawks Women’s Soccer team opened up the 2015 campaign with a convincing win over the Siena Saints Sunday afternoon at Al-Marzook Field. For most of the first half neither side was obtaining decent scoring chances though Hartford was threatening more.

Julia Carr however broke scoring open at 33:33 in unconventional fashion when she lofted the ball from far away and it managed to sail nicely over Siena goaltender Liz Rogan’s hands and underneath the crossbar. With the half nearing a close Ashley Claud went wide and sent the pass to the goal where Aaliyah Ingram awaited it. Ingram defeated Rogan in the brief showdown in front of the net. That nice play put Hartford up 2-0 entering halftime.

The second half was resulted in few chances for Siena as well, but at 76:56 Melina Spanos sent a pass from the far right across to Ingram who kicked it hastily to the right of Rogan for Hartford goal number 3.

Little offensively happened for a time after that but with just minutes left in the game the Hawks had a corner kick opportunity. Carr set it up, kicked it, and Erica Primovic headed it past the keeper splendidly at 87:29. A little over a minute later Siena did break Hartford Goalie Jessica Jurg’s shutout at 88:46 when Kirby O’Keefe picked up a goal assisted by Tara Sobierajski.

Hartford had 15 shots on the day and 10 reached goal. Rogan saved 6 and naturally did not save the other 4. Siena let loose only 5 shot attempts total, and of those 2 reached goal. Jurg made 1 save on the day though the second shot got past her. 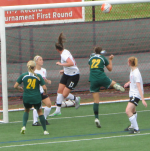