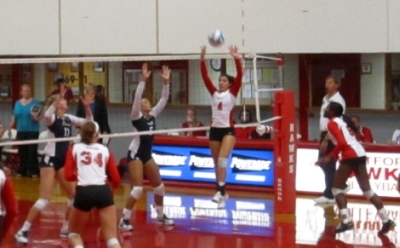 WEST HARTFORD, CT- The Hartford Hawks kicked off conference play Saturday afternoon as the Wildcats from New Hampshire rolled into Reich Pavilion also looking for a good start to the America East slate. The result was a pitched volleyball battle for 5 sets with Coach Jill Hirschinger’sUNH squad edging Don Ferguson’s U of H team by a razor thin margin.

Set 1 opened with the visitors grabbing a 9-2 lead including kills from Jessy Dick and Lauren Laquerre, and blocks from Destiny Tolliver and Laquerre as well. Kami Nethersole had the two sole kills for Hartford during the run.

After a time out, Sareeta Nethersole broke the New Hampshire scoring run, but the Wildcats would cling to their lead throughout. The Hawks would pull within 4 at the 12-16 mark, but spent most of the set down by even more than that as the two teams fought to a 21-24 score. Offense for UNH continued to include Laquerre who had multiple kills including hard smashes and well positioned taps. Dick added a tap over, and Amy Keding and Morgan Thatcher both got in on the scoring as well with kills. Even libero Sam Henke served up an Ace for a point. As Hartford worked to keep pace, Michelle Cordell had a kill and a block, and later unleashed a missile into the UNH zone, Kami Nethersole added a few kills, and Jackie Tamburri snookered the defense with a fake set which she turned into an attack. Dionna Kirton had a big smash though she was just warming up and Cordell precision placed a shot just in bounds. It would be Cordell later receiving a set from Tamburri and whacking it home, and a kill from Kirton that cut the UNH lead to 3, but Laquerre ended the set with a kill the volley later.

Despite there loss of the first set the Hawks were also coming to form, and in set 2 they and their opponents from the wintery north would trade points all the way to the 15-15 mark. Kami Nethersole had opened the set with a kill and then another soon after, the dangerous Lindsay Anderson added a blast and then immediately followed it with another on, and later Tamburri set the ball in for a point. Kirton’s big time kill, a Cordell kill, and a service ace from her, as well as an Anderson/Tamburri shared block, and a big kill from Sareeta Nethersole kept pace. For the ‘Cats Jansan Falcusan picked up a point in addition to her setting duties when she served up an Ace, later Thatcher careened a kill off a Hawk and onto the scorers table, and Laquerre struck again, and again. Dick joined in with a pair of kills, and Thatcher used finesse to tap the ball over the front line, though not long after she blasted a kill over as well.

Kirton however caught fire and the Hawks were soon up 19-17 including 3 kills from her. The Wildcats responded and Tolliver cut the lead to 1 with a light touch, only to have Tamburri invoke some chicanery with another fake set kill. Laquerre responded with a forceful spike, but the Nethersoles each picked up a kill to extend the lead to 22-19. Cordell then served up a ball that was not returned from the defender’s zone. Dick had two points in a row and Laquerre joined in on the scoring to cut the lead to 1 again, but Kami Nethersole’s smash created a set point situation. UNH however disregarded the threat as Dick and Laquerre picked up a block, and Thatcher’s spike blasted off a block. The score was tied 24-24, though Sareeta Nethersole regained the lead. Thatcher responded. UNH then stepped into serve but the attempted sailed out of bounds giving the advantage to Hartford. Leading 26-25, Kirton ended the set with another wallop 27-25.

With it fairly clear this was going to be a close match, the two teams went on to set 3, and before long it was 12-12. The Wildcats had picked up points from efforts including Keding’s early kill, a smash from Thatcher, two kills from the prolific Laquerre, a massive smash from Tolliver, Keding pouncing on an errant Hartford set to whack it back, two more kills from Thatcher including a shot just within the lines. She also paired with Natalie Decker on a block.

Anderson and Kirton shared a block to give the Hawks a 2 point lead and before long it was 16-12. Laquerre again responded, but Hartford clung the lead only to have Keding and Tolliver share a block, and Tolliver added to that with a gigantic spike, which Keding then followed with a missile to cut the lead to 1. When Falcusan came up with a block the score was 18-18.

Sareeta Nethersole regained the lead as her attack flew off a block, and Cordell picked up another, though Thatcher found a gap to wing an attack into. The two Nethersoles hit a 1 2 punch again for a 22-20 lead. New Hampshire however roared back as Laquerre added a block to her score sheet, though Sareeta Nethersole had one of her own, and Thatcher and Tolliver shared a block to follow. The two teams ended up at a 24-24 tie. But Keding broke things open with a kill and an errant Hartford attack ended set 3, 27-25 in favor of the Wildcats.

UNH now had an opportunity to win the match if they could close out set 4. The two teams once again kept neck and neck all the way to 14-14. The usual suspects on both sides kept to their offensive ways though Sam Henke picked up another ace. Yet another time in the set, the two Nethersoles would go back to back with points. This gave Hartford a momentary lead, though Laquerre continued to display her disinterest in Hartford scoring runs with a kill of her own. The Hawks however responded with 5 straight points including Sareeta Nethersole hitting an overpass back, Tamburri then set the ball to Cordell and a massive kill resulted, Danielle Etta, the libero served up an Ace to notch a point on the scoreboard and Kirton added a kill. The score was 21-15, and each team participated in a very long rally before Laquerre ended it.

Cordell, and two shots from Kirton created set point 24-17. On the ensuing back and forth UNH looked to have avoided the set loss, when the ball headed for the Hartford bench, but a Hawk caught up and knocked it backwards which a teammate received and returned it, soon after a UNH attack error would end the set 25-17.

The two teams were now notched neck and neck. Each had won a set by barely anything and each by a little bit of a run. But now there was nowhere to go but set 5.

Kami Nethersole took the first kill of the set with her spike, but New Hampshire rolled to a 5-1 lead. That run was broken by a UNH attack error, though early in the rally Etta had come up with a major defensive save to keep things alive. Sareeta and then Kami Nethersole each had a kill though Thatcher kept the Hawks from tying things with a kill, but a serve into the net by a Wildcat and Kami Nethersole’s service ace tied things at 6.

Laquerre’s kill regained the lead, but Sareeta Nethersole tied it back up. Following a good defensive save from Tamburri, Kirton hit the ball off the blockers. Another Hartford point followed, and then Kami Nethersole and Kirton each had kills to put the lead at 11-7. With set 5 being played to only 15 points the Hawks had quite an advantage.

Laquerre added a cross court kill to her resume for the day, and a Hartford attack error cut the lead to 2. Hartford added another point, but Keding had two straight kills, and Dick’s block to tie it at 1 put the team into hysterics. The scoring run continued unimpeded as the Wildcats picked up 3 more points and a light attack from Dick sealed the set 15-12 and the match 3-2.

New Hampshire picked up their second win of the season and is 1-0 in America East play. Hartford is now 9-8 and 0-1 in conference.

Laquerre lead the Wildcats with 22 kills and 5 blocks, Keding had 15, Thatcher 14, and Dick 9, Tolliver took part in 7 blocks.

For Hartford, Kami Nethersole had 21 kills, Sareeta Nethersole 16, Cordell 14, and Kirton 13. Cordell however had the best hit percentage of either team of the match with .500 (though Dick had .438) Anderson had 6 blocks and 6 kills on the day.

Editor’s Note: This is based on notes taken at the match, normally verified against the official play by play if possible. Reports focus on offense since it is easier to track but note defensive play whenever possible. It is difficult to note things like digs and assists although they are no doubt vital to the game.  Also, a lot happens in a volleyball game, far more than can fit into a report, so this just notes some of it.