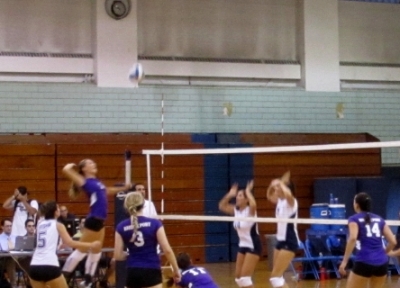 NEW HAVEN, CT- The University of Bridgeport and Southern Connecticut State University sit a short highway drive away from each other and Thursday night the UB Purple Knights visited Pelz Gymnasium on the SCSU campus. This night Coach Leo Uzcategui’s team would came away with a hard fought 3 to 1 set victory over Lisa Barbaro’s host Owls.

The match opened auspiciously for Southern as they picked up the Set 1 win edging the Knights after the two sides reached a 22-22 tie. The Owls picked up the next 3 points to win the set 25-22. For the blue and white, Sarah Beres opened up the scoring in the set, and added her team’s second point of the day, Megan Lyons proved to be an offensive threat including two straight aces early on and later she helped spark a comeback from behind with a tap over the UB front line and two big kills in short order. Beres also joined in with a pair of kills. Megan Hiss and Lauren McVey added kills, and it would be Syriah Celestine’s block to tie things up. McVey’s kill late in the set stopped Bridgeport’s attempt to take a lead, and the dangerous Lyons ended the set with two kills in a row.

Bridgeport’s Ivy Morrison and Tamara Leite shared a block to put the visitors’ on the board, and Biljana Savic had a slew of points early on accounting for 4 of the team’s first 6. Taylor McBeth and Fernanda Costa joined in on UB’s lead building as did Sabrina Simas who won a joust at the net. UB also benefited from numerous SCSU attack errors mid-set, though when the Owls started rallying, Morrison picked up a pair of kills to keep the lead momentarily intact. Savic and Simas added kills late, and Morrison had a block to tie the score at 21. Savic ended a long back and forth between the teams to take UB’s last lead of the set.

Despite the narrow loss of set 1, Bridgeport took command of both set 2 and 3 pulling out to leads that Southern just couldn’t catch up to resulting in scores of 25-16 and 25-15.

Costa opened up set 2 with a service ace, Savic didn’t take too long to score a kill off the blockers, McBeth, Simas, and Costa all added kills during UB’s initial 12 to 6 run. Following a Southern time out, Morrison added three kills to blunt two SCSU points, and Savic added three more kills of her own, and in the ix was a Simas block. Late in the set Costa found a gap to place the ball into, and McBeth’s service ace put them within 1, which a SCSU attack error would provide.

Southern’s offense came from Lyons with a kill, then a block, followed by a block and kill by Beres, Celestine’s block came soon after. After the time out Lyons struck yet again, Hiss sliced an attack through the blockers late, and Caelese Brown joined in with a kill as well. McVey’s missile shot flew passed the purple defenders, Lyons pounced on an overpass and sent it right back in for a point, and McVey landed a kill just in bounds in the effort to come back.

Bridgeport also rolled early in Set 3 as a 2-6 run came mainly through the team’s trading attack errors but a block from Simas, and an ace by Leite opened up a gap. As the visitors continued to build their advantage Simas had another kill, Savic served up an Ace, Costa’s attack hit an Owl and flew out of play, and a few rallies later she added two more kills of varying techniques. Morrison’s block and yet another kill from Savic put their team ahead by 10 points. Late in the set, Leite used the chicanery and used a fake set to instead direct the ball into mid court. Later Costa pounded the ball through the SCSU defensive wall. Finally Morrison ended the set with a spike after receiving a nice set.

Offensively for SCSU, Hiss and Celestine shared a block early, and Celestine had a solo kill later, while sharing a block with Kimberly Lachowicz right after. Lyons used a light touch to tap the ball through blockers, and Beres also used a tip off the D for a point. McVey and Katelyn Mayr had a block, as did McVey on her own, a few points prior to a kill for Despite their efforts Bridgeport still took the set.

With a two sets to one lead, Bridgeport readied for set 4, but SCSU was not going away and made the Purple Knights fight hard for a match win. Midway through set 4, UB took a 11 to 6 lead but SCSU would come roaring back thanks to a kill from McVey, a block from Lyons and Celestine, and a few Bridgeport errors. The score would narrow to 10-11, though the Knights picked up a couple points.

Lyons and Beres each picked up a kill in response, but three successive kills from Savic, including one which sent the ball careening into the seats, had UB up 4. Beres responded with two smashes to cut the lead in half, but Teite tapped the ball over the defense to keep the lead at 3. Beres struck again, and the two teams traded points, but Savic once again unleashed a big kill and Bridgeport started to close the door. Trailing 17-20, SCSU called a time out, but when play resumed Costa whacked the ball through the blockers, and a SCSU attack error would follow, the lead was now 22-17 for Bridgeport. They would give up two points with errors, but McBeth and Costa each had a kill to bring about match point. A serve out of bounds prolonged the set 1 more point, but Costa ended it.

Bridgeport remains undefeated with a 2-0 record, SCSU drops their first match of the season but has a 3 to 1 record. The Knights face Southern New Hampshire at home this weekend, SCSU goes on the road to take on Georgian Court and Felician.

Editor’s Note: This is based on notes taken at the match, normally verified against the official play by play if possible. Reports focus on offense since it is easier to track but note defensive play whenever possible. It is difficult to note things like digs and assists although they are no doubt vital to the game.  Also, a lot happens in a volleyball game, far more than can fit into a report, so this just notes some of it.