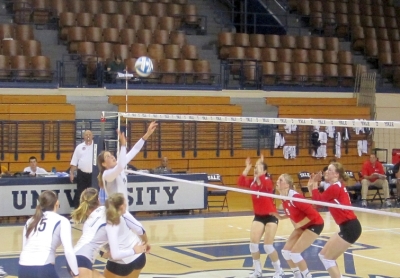 NEW HAVEN, CT- Coach Erin Appleman’s Yale Bulldogs closed out their Yale Invitational by hosting Beth Launiere’s Utah Utes Saturday night in front of an excited crowd at Lee Ampitheater. The result was a 3-1 win for the Utes in a razor thin contest between the rare visitors and the reigning Ivy League champions.

Set 1 opened up with a fairly even exchange of points as Utah’s Chelsey Schofield picked up a kill and an service ace, Yale’s Mollie Rogers responded with a kill of her own, and teammate Erica Reetz added a cross court smash. Allie Frappier hammered the ball into the Utah zone and followed it with an ace, though Utah tied it back up 6-6. McHaney Carter added a blast of her own for the bulldogs as the point trading continued to an 11-11 score featuring more kills from Rogers and Frappier. Utah scoring included two straight blocks from McKenzie Odale and Erin Redd, as well as a cross court attack from Redd.

Morgan Odale laced the ball just in bounds for a brief Utah lead, but Frappier responded by crushing the ball over. A good defensive save by Reetz, Kendall Polan, and Rogers on an ensuing play still led to Danielle Killpack and Jennifer Lanting’s block getting Utah a point but it was a good effort. Nikki Sim of the Utes picked up a good save on the next point, though Reetz scored the kill.

Utah picked up two quick points thanks to Killpack and Lanting, a time out followed but the point exchange continued to a 17-17 score. Morgan Odale regained the lead with a rocket, but Frappier responded with a whap off the blockers. Killpack, Morgan Odale, and Lanting in succession dropped the hammer on the Bulldogs though and it was 18-21, also on the rally, McKenzie Odale and Sim each had a key defensive save.

Frappier cut the lead to 19-21 but Utah rolled with Morgan Odale’s spike just in bounds, two more points and her service ace just within the lines. Utah took set 1, 19-25.

Set 2 was going to the battle royale of the match though. Utah jumped out to a 2-4 lead thanks to a tip from Redd, an ace, and a seeming block from both Odales and Killpack. Cordell of Yale served up an Ace to tie things back up at 4, and the points were traded. Rogers kabonged a ball off the blockers and Taylor Cramm picked up a kill. Utah responded and Killpack and Schofield had a block. Rodgers sent a cross court missile in, but Lanting had a kill right after. Frappier tied it back up at 9.

Meanwhile the partisan Yale crowd had been attempting to distract Utah servers as they lined up, the Utes however seemed to take it well and were smiling as they readied themselves, a very rare sight indeed.

Unfazed by the crowd, the Utes built a little lead of 13-15. This came about through a pair of Redd kills, a spike from Morgan Odale, another Redd kill, and a Yale miscue. Yale for their part capitalized on some Utah attack errors and Reetz picked up a kill.

The longest volley back and forth then occurred with key defensive saves by Yale’s Maddie Rudnick and Rogers, and Utah’s Abby Simmons and Sim. The ball just kept going back and forth and seemed like the rally would end multiple times, when it finally did Schofield tapped the ball to the gap, though the crowd applauded the effort anyway. The score was 13-16 and another time out followed.

Utah kept building pulling out to a 16-20 lead. A serve into the net ended their run, and Reetz unleashed a torrent of an attack through the Utes blocking line to cut the lead to 18-20. A time out followed though Redd scored the first point after, but Reetz didn’t let the lead grow. Schofield sliced the ball in, but McHaney Carter’s kill landed just in bounds. Morgan Odale teed up a tremendous spike to put her team within 2 of the win, but two miscues put Yale back within 1. She then added another cross court kill, but Haley Wessels sent the ball between the block attempt and Rogers used a light touch to tie the set at 24.

With ‘free volleyball” assured, Morgan Odale struck yet again, but Wessels found a gap to lightly send the ball sailing into. Killpack then blocked a Yale attack, but Reetz came up with a kill. On an ensuing desperate long rally, good saves were made by both Odales, though Frappier took the point. Schofield tied it back up at 27, but a serve out of bounds let Yale back up 1. Redd prevented the loss with a kill, but Carter received a set and put it to good use with a kill. Reetz then served an ace for the 30-28 set win which sent the crowd into hysterics.

Utah would take a lead in set 3 ,though thanks to Morgan Odale early on the lead grew to 6-9 also due to points from Shelby Dalton, a couple from Red, and others. Frappier pulled Yale back within 1, but Dalton’s crushed kill kept Utah ahead. Utah was able to start running off of that momentum, and Morgan Odale kept at it, a few Yale attack errors later, and another kill from her and it was 10-17. She then placed another spike just in bounds and the set was 10-18. Yale had no intention of going away and Frappier had a kill, plus Polan served up two aces, but in the meantime, both Morgan Odale, and Schofield picked up more points for the Utes. Still the lead narrowed to 18-21 as the two went at it. Rogers than knocked the lead down even more and a Utah error followed. Still that’s as close as Yale got as Utah finished ended up with a 20-25 score.

Utah now had the 2-1 set lead but Yale opened up set 4 with a 4-2 lead off of Polan’s kill and Roger’s ace among other things. The lead grew thanks to Reetz’s put down at the net, and Frappier continuing her offensive flury. Morgan Odale kept the Utes within 2, and the visitors started their own run, as Lanting, Schofield each had kills, and Sim’s Ace tied the set at 8.

Yale built a new lead including Reetz’s smash hitting a Utah player, flying out of bounds, through a door and down a hallway. Two more Bulldog points followed. Utah climbed back into the set with a smash from Schofield, a defensive save by Lea Adolph eventually paid off as they picked up a point and Reed typhooned a kill across the zone. Rogers regained the lead for Yale with a big time spike, but Morgan Odale crashed the ball into a gap, and added another kill soon afterward. Yale called a time out down 2.

Frappier emerged with a kill and Rudnick’s service ace tied up the game again, though Utah picked up a two point lead which they held until Rogers threaded the ball around the defender’s hands to cut it to 1. Utah however didn’t let Yale back in and Lanting, extended the two point lead, though Reetz cut it again, the Utes were able to regain it and hold off their hosts 22-25 to take the set and win.

Nonetheless an exciting finish between the two teams who really fought it out until the very end in an unpredictable slug fest.

Editor’s Note: This is based on notes taken at the match, normally verified against the official play by play if possible. Reports focus on offense since it is easier to track but note defensive play whenever possible. Also, a lot happens in a volleyball game, far more than can fit into a report, so this just notes some of it.