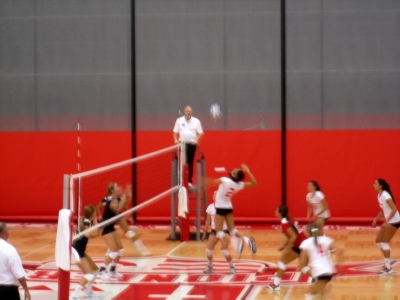 FAIRFIELD, CT- The Sacred Heart Pioneers hosted the second game of their tournament on Friday night and welcomed in from hills of Providence, the Brown Bears of the Ivy League. Coach Rob Machan’s SHU team would sweep Diane Short’s Bears to take the match.

The two teams got off to a fairly even start in Set 1 trading points back and forth before Brown pulled out to an early lead of 3-7. The Pioneers cut the lead to 7-8 with a run, though this was ended abruptly by Brown’s Maddie Lord smashing the ball over the net to regain a two point lead, followed by another pair of points including Thea Derrough landing a kill just in bounds. Elise Sage responded for Sacred Heart with a tap over the net for a point to keep the lead at only 3, though Brown extended it again by one.

SHU went on another run to close the gap 12-14, including a defensive save by Kimmee Roleder but Lord struck again. A flurry of back and forth ensued, and Sage cut the lead to 1, and it was soon 16-16. Sacred Heart picked up another point to take the lead, but Brown’s Taylor Bantle crushed an attack to tie it back up. The momentum was turning the Pioneers way though and Maile Hetherington picked up a kill followed by Dianis Mercado serving up an ace to pick up a 19-17 lead. Brown was not going away however, and they climbed back to a 21-21 tie including one of the many solid defensive plays by Annika Gliottone of Brown. 3 straight points by SHU would bring them to set point though, and Brown managed to score one more time before the home team closed the door 25-22.

Set 2 began with Sacred Heart rolling early with 3 quick points before a spike into the net gave Brown one, though SHU picked up another offensive kill right after. Brown responded with 2 quick points but it was off to the races for SHU who quickly got the set score to 10-5. Roleder send a kill through off the defenders to make it 11-6 and Johanna Ovsenek picked up a kill as well to bring the score to 13-6. Brown picked up a few points but the chasm between the two teams was daunting. Mercado whacked the ball off a Brown player and out of bounds in the midst of a run which bring the score to 20-12 in SHU’s favor. A pair of good defensive plays by Alisa Mesa and Roleder kept a long rally going though Brown picked up the point, as they mounted a mini comeback, bringing the score to 22-17. An attack from Ovsenek would score SHU’s 24th point, though the Bears would hold off the set loss for 3 more points before Ovsenek ended it.

The two teams fought to a 3-3 tie to open set 3, but Sacred Heart started rolling again pushing the score to 13-6 including points from Ovsenek, Sage, and Roleder. Brown tried to get back into it with points including a service ace, and a tap over from Kathryn Glickman, bringing the score to 13-9. Sacred Heart pulled away by 2, though Brown pulled back to 15-11. Ovsenek went on the attack again and was followed by others including an Alissa Young spike on a run that ended up putting the score at 20-12 before ending. Brown started a run of their own including a kill from Bantle, and a block from Bantle and Amanda Nickel, bringing the score to 21-15, but SHU was too far ahead, a smash from Roleder and one more point clinched set and match.

Sacred Heart would find themselves back in their home gym at 9:30 the next day to take on Hartford with Rutgers on the docket for the final game of the tourney in the afternoon as well. Brown was set to take on Rutgers and then Hartford in the middle of the Saturday action.

Editor’s Note: This is based on notes taken at the match, normally verified against the official play by play if possible. Reports focus on offense since it is easier to track but note defensive play whenever possible. Also, a lot happens in a volleyball game, far more than can fit into a report, so this just notes some of it.