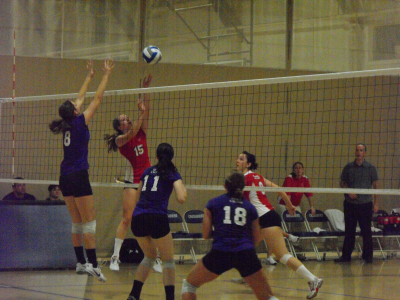 WORCESTER,MA- The Hartford Hawks got their first win of the season in a battle royale match against Holy Cross on the Crusaders home court tuesday night. The Hawks pulled out to a 2-0 set lead, but the Crusaders battled back to tie the match at 2. In the decisive 5th set, Holy Cross grabbed the early lead, but Hartford swept back in to win the set and match.

[Editor’s note, it’s Worcester Mass, getting lost is easy, missed the first set and didn’t really get up and running until the second. Doesn’t happen much but there ya go. Thus the normal play by play will be slightly curtailed. As always the reports are somewhat offense oriented by nature, but that doesn’t take away from the critical defensive efforts that each side will make during a game.]

After picking up set 1, Hartford narrowly edged HC in set 2 with a 26 to 24 score. There was a great many tie scores throughout the set as the two teams didn’t give any ground. Set 3 was also a close match with the back and forth intent and the two teams reached a 24-24 tie, with Hartford on the cusp of victory, Holy Cross scored the next two points to stay alive.

Highlights for Holy Cross included Megan Lynch sending a ball into the defensive corner, Callie Black won a joust at the net and tapped it over. Lynch had a block soon afterward, and Black used a tap for a point as well. She also sent a kill from the net off the blockers, and Alex Aycock follower her sooner afterward with a kill off the blockers to the floor. Chelsey O’Donnell used one of many of her fake set misdirection attacks and put the ball over the net early on. Aycock struck again as well, and several points later Liz Ashton finessed the ball over the defensive line. Lynch later struck again, and Christiana Blakeslee sliced an attack through the Hartford defenders as well. Lynch and Black each had more points and Aycock scored a couple more kills at either end of a Hartford streak of errors. Though it would take more to put them over the Hawks.

In this set, highlights for Hartford included Michelle Cordell sending a kill by the blockers, and not long after serving up an Ace. Kami Nethersole continued her offensive production with a kill off the blockers. It was not long before Lindsay Makowicki launched an absolute rocket into the HC zone for another point. Later Sydney Scott and Dionna Kirton shared a block, and Kirton sent a missile down the defensive sideline a few points later. Nethersole spiked a blast and Makowicki struck a few more times in close succession. Cordell picked up a kill again, and Lindsay Ford did a fake set attack that did get saved by Holy Cross, but was a clever maneuver. Cordell served up an Ace that was so close to being out of bounds, the Crusaders hesitated. Nethersole would score their last points of the set launching the ball through the defense hard as well.

Set 4 went more in the Crusaders favor as they pulled out to a lead and held it for the 25-18 win. Highlights for the home team were varied and included Lynch and Black’s block, Blakeslee’s kill to the back defensive area, a running jumping kill by Kathleen Colpoys, another fake set attack from O’Donnell, this time, a very quick back hand, a big kill from Lynch, yet another fake set misdirection by O’Donnell, and she added a straight kill later on, and Black had a block. In the closing moments, libero Angela Chisholm served up an ace, Lynch sent the ball flying through the blockers, and a Blakeslee whap ended the set.

Hartford’s highlights included a couple early kills from Nethersole, a tap over by Cordell, followed by Kirton, Nethersole, Scott, picking up more kills. Makowicki then launched a shot in front of the defenders. Cordell picked up a pair, including a rocket over the net. Kirton’s tap over and two huge spikes from Nethersole and Scott rounded out the scoring.

The set opened with a Kirton kill for Hartford, but on the next play the Hawks blocked out of bounds to tie the game at 1. Lynch then sent a smash down the line for a 2-1 lead, though Hartford responded with a whap to the back of the Holy Cross zone. Lynch struck again to regain the lead but the Crusaders served into the net to tie it back up. Hartford served the ball out of bounds, and Lynch added a hammered shot to take a two point lead. Nethersole responded typhooning the ball through the blockers to cut the lead to one and an errant Crusader attack out of bounds put thing sat 5-5.

Colpoys then hit a big time spike to regain the lead, but Kirton used a light tap to tie it back up. Aycock responded with a kill, but Hartford’s Cordell picked up a kill, only to have Aycock strike again. O’Donnell stepped in and served up an Ace, and the Hawks later attacked out of bounds. The Crusaders now led 10-7 and Hartford called a time out.

When play resumed Holy Cross picked up another point, but Hartford started to roll. Lindsay Ford got on the scoring when her kill flew off a defenders hands, and literally over the net separating the volleyball court from the rest of the field house. A two contacts error on HC, a Cordell cross court smash, and a Nethersole kill tied the score at 11. Aycock regained the lead with a tap over, though Cordell tied it right back up with another cross court attack. Following a great defensive save by Cordell on the next play, Nethersole launched a missile off the defenders and out of bounds. The score was now 12-13, but Lynch responded with just a massive kill. Nethersole whacked the ball of the blockers though, and Ford stepped in and served up an ace when the ball hit the defenders hit the rafters and was unreturnable.

Hartford picks up their first win of the season and Holy Cross falls to 3-6.