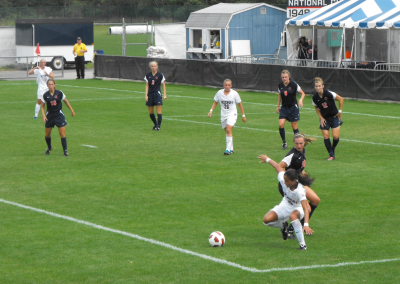 STORRS, CT- On a rainy afternoon the University of Illinois Fighting Illini arrived at Morrone Stadium to take on the Huskies. Jessica Dulski was in goal for UConn and Steph Panozzo started in goal for the Illini. Each side had a few chances early in the match with no result. The entire day would be a juxtaposition of the Huskies getting on breakaways, and Illinois attempting to leverage a variety of corner kick opportunities into goals. Each goalie came up with several saves including breaking up multiple attacks throughout the half. When the second half opened Alexandra Kapicka took over in goal for the U of I.

After some additional back and forth, UConn got the scoring open at 53:47 as Melissa Busque broke in on goal and after the D intervened the ball came to Jessica Shufelt who shot it up and over Kapicka for a 1-0 lead. Busque picked up a second opportunity, but the shot hit the top cross bar close to the 60th minute. Each side continues to threaten. UConn dodged a bullet when Dulski went out to play a ball, but it got by her. The defense jumped in and prevented a goal. Illinois continued to get a variety of corner kicks, a large number to almost none compared to UConn’s. The UConn defense held off the assaults. Illinois kept up the pressure and eventually Jordan Hilbrands got it past Dulski during the scrum after a corner kick as 72:30.

Regulation ended in a tie and a hard fought overtime period passed as well. 3 minutes and 8 seconds into the second overtime, Shufelt got fed a ball and knocked it pass the Kapicka at close range to win the match 2 to 1 netting the Huskies their first win of the year and Illinois their first loss.