Women’s Soccer: Army goal in last minute of play nets them a 1-0 win over Central 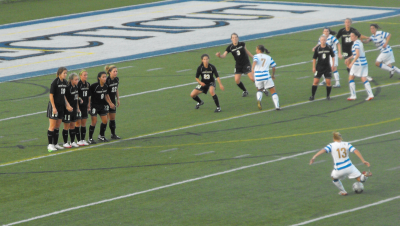 NEW BRITAIN, CT-The Central Connecticut State Blue Devils Women’s Soccer team fell to the visiting Army squad due to a disputed goal in the last minute of play. An Army corner kick put the ball in play apparently bouncing off the goalie’s hands past the goal line, though the Central players were none to happy about the ruling.  The majority of the first half had had few scoring chances, though Army had decidedly more opportunities.  CCSU got in their shots in the second half though Army threatened as well throughout.  The win puts Army at 1-1 for the season, and Central at o-1 in the out of conference contest.