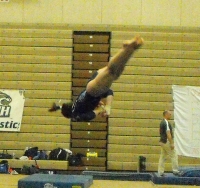 PROVIDENCE, RI- A unique meet to say the least took place this Sunday at Brown’s Pizzitola Sports Center. The Division 1 Ivy League Brown Bears hosted the Division 2 Southern Connecticut State University Owls, Division 1 and top 36 team, the UNH Wildcats, and the formerly Division 3 and now club team, the MIT Engineers. Brown and SCSU are also both part of the USAG Collegiate Nationals Division as well, which is a separate ranking system for teams with limited scholarships. UNH took the victory as expected with a 193.850 posting their highest road score of the season after a 195.00 set at home in Durham last week. After losing narrowly to SCSU the week before in New Haven, Brown took the win over the Owls with a 186.400 to Southern’s 184.925. Both scores reflected scoring improvements from the week before however. MIT is now competing without the support mechanism of varsity status, but still put five gymnasts on the floor and scored a 153.700 which is not a bad score considering the circumstances.

Turning to the results themselves, UNH’s Chelsea Steinberg placed first on Vault with a 9.675, her teammates Katie Caliendo, and Helena Diodati were second with 9.650, fellow Wildcats Courtney Connors and Diane Grey placed 9.6 and 9.525. Rebecca Brady was the top scorer on Vault for SCSU with a 9.500, followed closely by Sarah Holensworth and Briana Dipinto. Carli Wiesenfeld was the top scorer for Brown today with her 9.275 and Karis Stevenson’s 8.950 was the top MIT mark.

On Bars UNH swept the top 5 places with a 9.825 for Danielle Reibold, 9.775 for Ali Carr, 9.650 for Steinberg and Grey, and a 9.625 for Katie Lawrence. SCSU’s Justine Basley returned to competition and led he team with a 9.550 and cracked the top six. A trio of gymnasts had 9.525 including SCSU’s Sarah Darst, Brown’s Julia Meyer, and MIT’s Zara Karuman. Meyer and Karuman led their respected teams on that event.

Steinberg and LaFountain set the top mark on Floor with a 9.850, and teammate Sauchuk was third with a 9.825. Brown’s Helen Segal and Chelsey Binkley broke into the top 6 with their 9.75 and 9.725 respectively, and UNH’s Courtney Connors rounded out the top 6, though UNHers Tasia Percevecz, Austyn Fobes, and Bears’ Nicole Abdo, and Katie Goddard were right behind the top 6 as well. Rebecca Brady posted a 9.550 to top Owls and Karuman had 9.0 to lead her MIT club as well.

In the All Around, Steinberg competing in the AA for the first time since her freshman year, scored a 38.975, Binkley was second with a 37.025, and Brady had a 36.825. Brady had topped Binkley the week before for the AA title at Southern. Brown’s Emily Lutfey scored a 36.700 and Kara Zaruman had a 35.475 to lead the Engineers.

It is still early yet as Brown and SCSU have only competed in two meets, and UNH three.

Routines Lists for the teams will be revised and posted soon, but you can look at the lists that were current as of last week here: